The Fulham Supporters’ Trust is an independent group of Fulham fans. We are there to safeguard the best interests of all Fulham supporters. 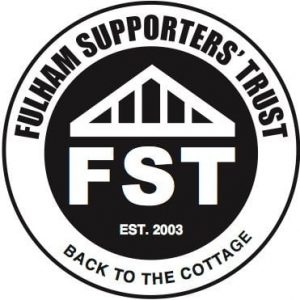 Players, managers, owners and staff come and go, but we, the Fulham supporters, remain through thick and thin. We are the lifeblood of the club.

Without us there is no club.

We began life as the Back to the Cottage campaign and will always seek to safeguard Fulham FC’s long term future at Craven Cottage. Today our aims are significantly wider.

We have an award-winning structured dialogue with Fulham FC which allows us to represent the views of supporters on a range of issues and influence the club at the highest level.

We aim to protect Fulham’s unique identity at Craven Cottage, keep football at Fulham accessible and maintain a strong connection between the club and supporters.

We do this by

Above all our mission is to look after the best interests of Fulham supporters at all times.